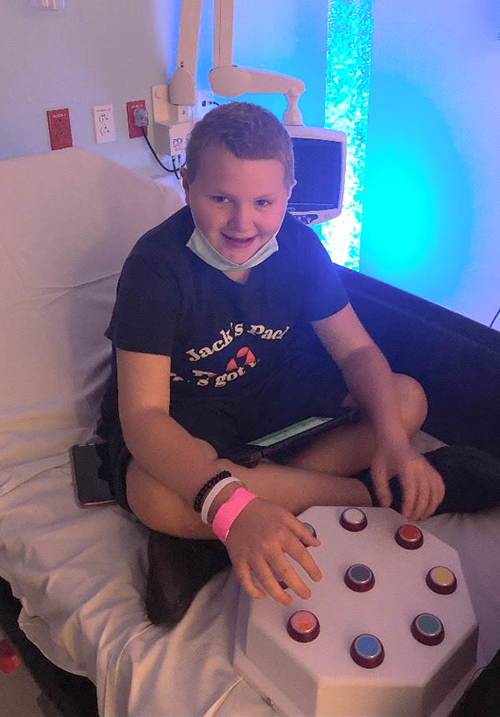 Jack’s journey started when he was 6 years old in kindergarten at St. Anthony of Padua school in 2014. He was diagnosed with Acute Lymphoid Leukemia. After the first month of treatment he was put in a category of very high risk of the disease coming back. Jack’s treatment was long and vigorous. He spent the next three and a half years receiving chemo through his port as well as oral chemotherapy, daily. During this time Jack received numerous blood and platelet transfusions. Jack was due to ring the end of the treatment bell in March of 2018. In February, his oncologist did one last bone aspiration as well as a spinal tap to make sure all the cancer was gone. Unfortunately, just a few days later we were told that his cancer had returned. This time his cancer was found in his central nervous system and a small trace in his bone marrow. In March of 2018 Jack began full blown treatment again. Jack’s diagnosis this time was considered to be very rare with only 4% of cases in the United States. The new treatment plan called for much stronger chemotherapy and many admits in the hospital. He had gone through many types of treatments and surgeries.

Most have heard the poem The Dash by Linda Ellis where she states “…would you be proud of the things they say about how you lived your dash?” Jack Morgan’s Cancer treatment “Dash” is quite a dash! Jack was diagnosed with PreB ALL Leukemia on September 24th, 2014 and finished his scheduled chemo treatments on May 29th, 2020. For those of you counting, that is 2074 days of Cancer/Cancer treatments/no hair/sore legs/headaches/body aches/50 spinal taps/9 bone marrow aspirations/359 CBC’s/86 days inpatient/75 infusion days/200 office visits/and in general 2074 days of not being a kid and touching his family and friends hearts more than he will ever know. Jack has only been on this earth for 4341 days and almost half of those days have been at TCH or confined to his house. During this Dash, Jack has been able to make everyone around him laugh and he has grown in wisdom and smarts throughout this journey. We tell everyone who will listen that Jack made this journey “easy” – he does not complain (much), he is caring of others, and through over 5 years of treatment and setback after setback – Jack has been amazing, a true superhero. He can quote just about any movie he has watched (and it has been a lot) – enormously proud that he has most Jim Carey movies memorized! He is the fist in the house to ask his mom, dad and even his brothers JD and Jacob if they are OK when he knows something is not quite right with any of us. There are too many people to thank personally who have prayed for Jack (P4J) and supported Jack and our family during these very trying 2074 days. And we ask that you do not stop P4J’ing as Jack’s journey will continue for quite some time. Jack had another bone marrow aspiration and lumbar puncture towards the end of June and with all our prayers we were able to here the words that Jack is CANCER FREE!

With all this being said, this is why Jack’s Project started. Jack, and a call from God, inspired us to make a difference in this world. With many children going through the same thing Jack is, if not worse, we want to find a way to bring JOY to these kids. These children go through physical, emotional, and mental hardships during the harsh times. We want to give hope to families this holiday season. This project is intended to spread joys to kids, hope to families, and the true meaning of Christmas to all.